The purpose of the workshop was to establish a link between young people living in the shire and the emergency management planning process. The Municipal Emergency Management Planning Committee endorsed the workshop as a way to consult with young residents regarding the local emergency management plan. The Youth Services Development Unit at the Shire attracted young people via a Facebook page and also made contact with local schools where students could nominate themselves to take part. Fourteen young people aged between 16 and 23 years participated in the workshop.

The workshop presentations provided good information and attendees began to understand the areas of emergency management. For most young people in attendance, this was the first time their opinions had been sought by older people and it was a great opportunity and experience to have thoughts and ideas tabled and valued.

Some time was needed to bring the young people to a common understanding of current emergency management practice. Mutual respect and trust were important values underpinning the day.

Throughout the workshop, young people identified key issues that were of concern and provided the Youth Services Development Unit and Emergency Management Unit with suggestions, direction and actions that could be addressed to improve community preparedness, resilience, and recovery in emergency situations.

There were some key areas that attendees identified, which included the following three areas.

Attendees were able to identify that young people generally may not have experienced an emergency situation or have a full understanding of consequences or the possible roles they could play. Aspects of life experience and understanding what a disaster means were discussed and it was felt that it would be good to have ways to learn from other young people who have lived through disasters.

Some of the ideas to share knowledge developed during the workshop included joining with several schools in the area to help raise knowledge and awareness about emergency situations. This could be organised by young people with support from local SES, police, fire agencies, ambulance and the Red Cross.

How do young people have their voices heard?

Attendees identified that early planning and being prepared are key success factors for resilience in emergency situations and disasters. Joining with peers to explore scenarios, recognise and understand what might play out in a community during an emergency response, and what effective roles they could play in relation to emergency preparedness and what to expect in emergency recovery, was a strong consideration. 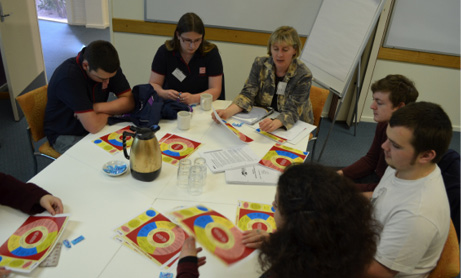 Group discussions allowed opportunity to have thoughts and ideas tabled.

The workshop participants identified a number of activities that would help increase their understanding and effective participation. These are listed in Table 1.

After the workshop, the Youth Services Development Unit and the Emergency Management Unit used ideas identified in the workshop to formulate a plan for future action, as well as developing key learnings on how to discuss emergency management issues with young people.

Recognising the important contribution young people can make to the ongoing development of the community, the Youth Services Development Unit worked to increase the Shire’s engagement and support of young people in the area of emergency management. The Municipal Emergency Management Planning Committee (MEMPC) received a recommendation that a youth sub-committee be formed to bring ideas forward to discuss the needs and concerns youth and children have in relation to emergencies. The purpose of the youth sub-committee was to examine how younger people are considered in emergency preparedness and training and then to be a representative voice for how the Shire supports children and youth during and after an emergency. The sub committee’s formation was enthusiastically adopted by the MEMPC, which suggested that the Youth Sub-Committee report to the Committee at each meeting. This will keep the MEMPC informed of the concerns, recommendations and findings of the youth sub-committee.

Table 1. Suggestions of activities younger people can do to prepare for emergencies.

The MEMPC recommended that two youth members be appointed to the committee to bring a youth voice to emergency management planning activities. This will bring insights into discussions where youth engagement would not have previously been sought. This has been adopted by the MEMPC and the authors, two secondary school students, are the first regular young members of the MEMPC.

Anne Louise Linder, Shire Municipal Emergency Response Officer, said ‘Having young members on the committee means that the needs of children and young people are front and centre, and you can’t help but to give consideration to their requirements. One of the direct outcomes of engaging with the students has been the review and update of our relief centre planning to include a dedicated space for youth. This was done with direct consultation with the young people so that they had a say in how relief centre plans would reflect their needs.’

As a result of increased engagement with young people in the community, many stakeholders, including the Shire Council, schools, and local emergency services organisations have come to regard the ideas of young people as having a valid contribution to emergency management planning and response. Key to this were the efforts of people within Council and local community organisations who championed the need for greater youth engagement in emergency management activities and who were supportive of young people driving change and establishing a voice.

Young people are already mobilising to support recovery efforts and address problems during an emergency. One example of this is the Student Volunteer Army that was formed via a Facebook page and responded to community needs following the earthquakes in Christchurch, New Zealand in 2010 and 2011. The SVA used everyday technology to co-ordinate thousands of volunteers to clear tens of thousands of tonnes of mud and soil, deliver clean water, and direct community members to recovery services. They worked closely with many organisations to deliver pamphlets, lay sandbags and man call centres. Closer to home, the Facebook page, ‘Tassie Fires We Can Help’, which was set up during the January 2013 fires in Tasmania is another example. Its creator, Melanie Irons, was not from a fire-affected area but she wanted to help and realised she could use technology to connect those who needed assistance with those who could help. Melanie co-ordinated a huge recovery effort and has made a significant contribution to the communities that were affected by fires along with contributing to emergency management planning for Tasmania.

Angus Hocking is a year 11 student at Gisborne Secondary College. He is an active volunteer involved in ‘Music in the Sticks’, a local FReeZA initiative, for the last five years. Gus has attended a Disaster Resilient Australian Schools Education Network meeting where he contributed to small group discussions about disaster education.

Bethany Taylor is a year 11 student at Kyneton Secondary College and has been a CFA volunteer for more than three years. Beth wants to make a contribution to her community by making positive changes for young people.

Kylie Tupek is the Philanthropic Grants Coordinator at Save the Children Australia, where she has worked for over five years. She has a Bachelor of Arts (International Studies) and is currently studying law at RMIT University.

This paper was developed at the Paper-in-a-Day workshop held in August 2013. The authors worked alongside a staff member from Save the Children who assisted them with documenting their thoughts and experiences in emergency management planning.