Tropical Cyclone Oma: a near miss for Brisbane

In February 2019, Tropical Cyclone Oma caused alarm in South East Queensland as the Category 2 system tracked south and then west in the Coral Sea. Some forecasts suggested it could make landfall near Brisbane but eventually it tracked back out to sea. While people in the Brisbane area had a near miss, there are some interesting aspects of this event regarding its track, position and damage potential that are worth noting from a hazard mitigation perspective.

Cyclone hazards can be significant without landfall

In Australia, the most hazardous tropical cyclones have been associated with strong winds and heavy rain associated with landfall. However, significant coastal damage can still occur without a cyclone making landfall. Tropical Cyclone Oma was a good reminder of this. As the cyclone approached the Queensland coast, it was caught in an upper troposphere stream that caused a 180-degree turn to the north and the system ran parallel to the coast for approximately 700 km offshore (Figure 1). Figure 1. Observed and forecast track of Tropical Cyclone Oma at 10 am on 23 February 2019 in the Coral Sea. Source: Bureau of Meteorology 20191

At the Brisbane wave buoy, located east of North Stradbroke Island, significant offshore wave heights of over five metres were measured between 23 and 25 February. Maximum wave heights exceeded ten metres over this period.2 A significant wave height of five metres at Brisbane is higher than 99.9 per cent of all waves occurring in this area since 1997. Wave periods were around 13 to 15 seconds, meaning these waves were travelling at around 70 km per hour.

The waves generated from Cyclone Oma were felt as far south as Sydney and north to Bundaberg. At Byron Bay, wave conditions were similar to those recorded at Brisbane, with significant and maximum wave heights exceeding five and ten metres, respectively. At Coffs Harbour, wave heights exceeded four metres.

These waves carry a huge amount of kinetic energy; around 170 kW per metre wave crest length. This is about the same as a typical car engine, bound in a single metre length of the wave. Large waves caused coastal erosion on the Sunshine Coast and Gold Coast and into northern NSW. Beach and dune erosion were exacerbated by spring high tides, which meant waves were able to erode higher up the beach slope.

Coastal inundation was limited and, of the flooding that did occur on the coast, images and videos shared on social media indicated this was mostly wave-driven. Large waves lead to super elevation or ‘setup’ of coastal water levels in the surf zone, equivalent to approximately 15–20 per cent of the offshore wave height. This means that five metre waves offshore can increase water levels at the coast by up to one metre above the tide level (Figure 2). For this reason, activities such as rock fishing or rock-pool swimming are highly dangerous during large wave events, even if the cyclone is 700 km offshore. On the Gold Coast, water levels reached the highest astronomical tide (HAT) level, while around Brisbane and on the Sunshine Coast, levels remained below the HAT. Most coastal infrastructure is designed using HAT as a baseline, thus large-scale coastal flooding was not seen. However, some locations around Brisbane and the Sunshine Coast adjacent to tidal rivers experienced minor flooding (Figure 3), which calls into question the capacity of these areas to deal with larger flood events and the impacts of sea level rise. 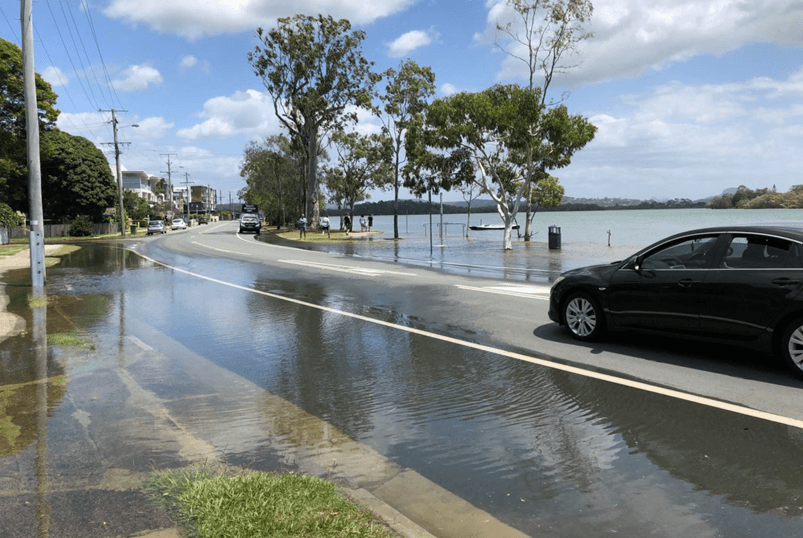 Oma’s southerly track was unusual but not unprecedented

The entry in PerilAUS for tropical cyclone Dinah is:

Dinah developed in the central Coral Sea and tracked southwest before recurving just off the Queensland coast between Gladstone and Bundaberg. The system caused severe damage at Heron Island initially from inundation from large NE swells and then a day later from winds. Although the system remained off the coast, winds caused damage along the coast between Rockhampton and Grafton. Huge seas and storm surge caused severe erosion at Emu Park, Yeppoon and in the Maryborough to Bundaberg area. More than 100 homes were flooded and at Cribb Island 1 house was washed into the sea. Storm surge also affected the Gold Coast with water lapping on the decking of the Jubilee Bridge which is about 1.5 metres above highest astronomical tide. A section of the esplanade collapsed at Surfers Paradise. A similar storm surge occurred on the Tweed River isolating Fingal.

In addition, the ‘Great Flood of 1954’, which resulted in the largest flooding on record for northern NSW and South East Queensland, was caused by a tropical cyclone that made landfall just inside the Queensland border at Coolangatta.

Previous research by Risk Frontiers estimated the likely insured and economic costs of a similar event to the Great Flood of 1954 occurring today.5 The lower-bound estimate of the insurance loss using current exposure and assuming 100 per cent insurance penetration for residential buildings and contents was $3.5 billion, which would make it the third-highest ranked insured loss due to an extreme weather event in Australia since 1967. The corresponding and normalised economic loss was estimated at $7.6 billion.

Research suggests that southward-tracking tropical cyclones may become more frequent with anthropogenic global warming.6 The assumption is that preferential warming at lower latitudes extends atmospheric conditions favourable to cyclones further south. In addition, a southward extension of the warm-water East Australian Current that runs down the east coast of Australia, may elevate sea surface temperatures providing an extended energy source for tropical cyclones into the South Coral and North Tasman seas.7

If this trend were to eventuate, this could signal increased tropical cyclone risk for Brisbane and Perth These two cities do not regularly experience tropical cyclones but have large potential exposure compared with the lesser populated areas in northern areas of Queensland and Western Australia.

Sea level is projected to rise between 0.5 to 0.9 metres in the Brisbane area by 2090, relative to the 1986–2005 mean.8 A 0.9 metre rise would have increased the total inundation of Tropical Cyclone Oma by approximately 60 per cent. The observed flooding, which barely exceeded the HAT level during Cyclone Oma, demonstrates a significant vulnerability to sea level rise particularly around creeks and rivers with a tidal component.

It is worth noting that these estimates of sea level rise are highly uncertain and could be considerably larger depending on the response of the Antarctic ice sheet to global warming. Previous periods in the Earth’s past with comparable temperatures to today experienced sea level rise in excess of six metres higher than present day levels. It is perfectly conceivable that the rate of sea level rise over the next 100 years may be two to three times greater than current projections if the West Antarctic ice shelf ‘decouples’ (Ian Goodwin, pers. comms.).

For areas north of Rockhampton, sea level rise coupled with the effects of prolonged marine heatwave events could increase exposure to cyclone-related coastal hazards. At present, the Great Barrier Reef significantly attenuates wave energy during cyclone events.9 A reduction in the roughness and depth of coral reefs (as occurs during bleaching events and subsequent die-off associated with marine heatwaves)10 will likely reduce the wave energy dissipation effect reefs have for the adjacent mainland coast. An event such as Tropical Cyclone Oma may therefore have more impact in the future simply by virtue of higher mean sea levels and coral bleaching and die-off, without considering uncertain changes in tropical cyclone climatology.

Tropical Cyclone Oma was a near miss for the highly populated area of South East Queensland but serves as a reminder of the vulnerability of this area to present and future tropical cyclones compounded by a rise in the mean sea level.

The Risk Frontiers tropical cyclone loss model, CyclAUS, models a 50,000-year tropical cyclone climatology under present-day climate conditions for the Australian region and can be used to explore scenarios and changes in cyclone activity and sealevel rise on the Australian coast. The Risk Frontiers PerilAUS database provides a longer-term view of cyclone risk in South East Queensland.