Australian Red Cross emergency service volunteers from across Australia have provided support to people affected by the unprecedented monsoonal floods in North Queensland.

By 14 February, over 50 schools and early childhood centres had been closed, over 1800 homes were damaged by floodwaters and people were without power. Over 31,000 applications for emergency hardship assistance had been received and more than $5.5 million had been paid in benefits.

The Australian Red Cross was activated by the Queensland Government to support the flood response and recovery. Their role was to provide psychological first aid in recovery centres and in the community. Red Cross also reconnected people who had been separated or had lost contact during the disaster using the Register. Find.Reunite.1 service. 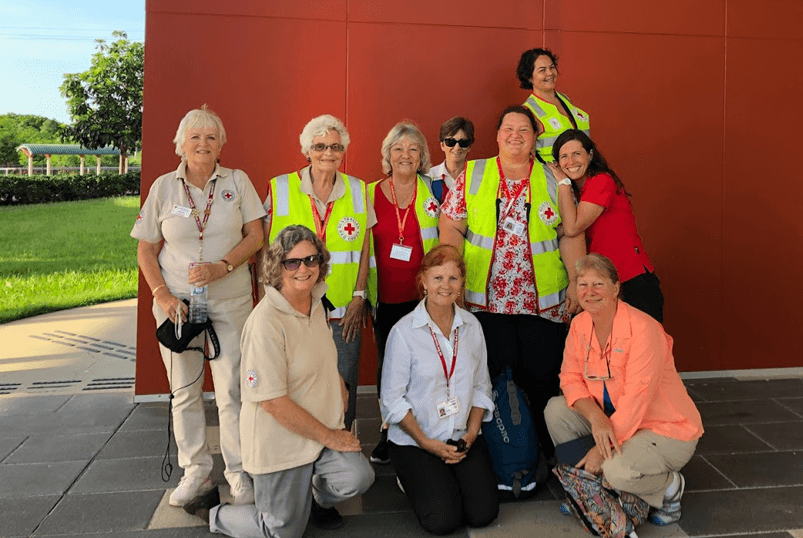 The first wave of Red Cross volunteers came from within Queensland, but as more resources were called on, the Australian Red Cross national deployment system supported the mobilisation of volunteers from across Australia, from as far away as Bunbury in Western Australia.

The Queensland Department of Communities was responsible for the recovery centre where volunteers were deployed. The centre included services from the Queensland Department of Communities, Centrelink, Salvation Army, Lifeline, Save the Children, Orange Sky (a free, mobile laundromat), Housing Assist and Australian Red Cross. Insurance and telecommunications companies were also present.

Conditions on the ground were challenging. Townsville was entering a week of heatwave with temperatures exceeding 37 degrees every day. At the recovery centre, volunteers met people as they arrived, listened to their stories and provided psychological first aid as they waited for assistance.

In just four days the team met with over 1000 people. For some, it was simply a friendly hello or goodbye. For others, the team spent over an hour with them as they came to terms with their situation and rallied their strength and resources for the long road to recovery.

Connecting people with support and encouraging self-efficacy are important elements of psychosocial support. When people are preoccupied with the urgency of cleaning mould, arranging for rubbish removal, managing jobs and businesses and supporting others, they often don’t take the time to look after their own physical and mental health needs. Supporting people in the recovery centre is important, as this is often the time when the emotion and stress catches up and their resilience starts to falter.

The unprecedented monsoonal floods in North Queensland have had a devastating impact on people and property and will be followed by a long road to recovery.

Queensland’s Disaster Management Officer’s Network, Sarah Dean, Matthew Dyer and Nicola Moore, Tablelands Regional Council, Bundaberg Regional Council and Office of the Inspector-General Emergency Management Before, during and after emergency events and disasters, local government employees are often at the frontline and play a significant role in coordination and communication for their communities. In Queensland, the Disaster Management Officer’s Network allows these people to connect and share their skills, knowledge, resources and ideas.
Publication: