Preparing for disaster: preparedness in a flood and cyclone prone community

Research suggests that the perception of a threat, high levels of self-efficacy, and high levels of social connectedness and trust may facilitate engagement in preparatory behaviours for severe weather events. To identify the psychosocial determinants of preparatory behaviours in cyclone- and flood-prone communities, a questionnaire was completed by 275 (103 males, 169 females, three not identified) participants from a north Queensland community. The results from this study show that perceived susceptibility to a future severe weather event, social connectedness, and self-efficacy significantly predict part of the variance in preparatory behaviour. Therefore communicating personal vulnerability to an event, providing information on how to undertake recommended preparatory action, and increasing engagement in the community may contribute to effective preparation at the community level.

Research suggests that the first step in encouraging adaptive behaviours for preparing for an extreme weather event, is for the individual to perceive a threat to which they need to respond (Witte 1992, Sattler, Kaiser & Hillner 2000, Terpstra 2011, Grothmann & Reusswig 2006). Perceived threat can be conceptualised as the combination of the perceived susceptibility to and perceived severity of the threat (Witte 1992, Maloney, Lapinsky & Witte 2011). Research investigating cyclone or hurricane and flood preparedness found that perceived threat significantly predicted preparation (Sattler et al. 2000, Grothmann & Reusswig 2006, Tempstra 2011). As such, part of the challenge for increasing preparedness in individuals is to ensure the nature of the threat is well communicated. Perceptions of threat of future severe weather events can be influenced by the source of the threat communication (Astill & Griggs 2014) with research suggesting that people are more likely to prepare if the information is communicated from a trusted source (Ramirez, Antrobus & Williamson 2013). Further, research indicates that levels of trust and quality of connections that a person has within a community can help preparedness (Ramirez, Antrobus & Williamson 2013, Pennings & Grossman 2008, Terpstra 2011). This suggests that those who seek more information from reliable sources and have good relationships within the community would be better informed about the situation and thus more likely to make the necessary preparations.

Perceptions of threat and behavioural intentions are also influenced by evaluations of past experiences. Prior experience with a severe weather event can influence the way a threat is perceived (Pennings & Grossman 2008, Usher et al. 2013). As individuals experience the world around them differently (Paton, McClure & Burgelt 2006), experiencing a previous natural disaster or extreme weather event may influence their perception of a future threat. However, researchers are divided on this issue with some supporting the premise that prior experience lowers preparedness (Briere & Elliott 2000) while others suggest that experience is beneficial in increasing preparedness (Sattler, Kaiser & Hillner 2000, Bonanno et al. 2007). Yet much of this literature has investigated populations in which the event occurs relatively infrequently (Suls et al. 2013, Watanabe et al. 2004, Bonanno et al. 2007). As such, the role of experience in increasing preparedness remains unclear.

Yet, recent research suggests that the role of threat perception and past experience may play a lesser role in preparedness behaviour than previously expected. Specifically, recent research suggests that individual coping appraisal plays a bigger role in adaptive outcomes (Poussin, Bolzen & Aerts 2014). ‘Self-efficacy’ is the belief that one has the ability and capacity to perform the behaviours necessary to produce a desired outcome (Witte 1992, Bandura 1998). As such, once an individual has actually perceived a threat, high levels of self-efficacy can allow the individual to start making the necessary preparations.

The aim of this study was to investigate the preparatory behaviours of a cyclone- and flood-prone community when an event threat was not present. Given the likelihood of increases in frequency or severity of cyclone and flood events (Middelmann 2007), it is important to understand the level of preparation currently undertaken and how this can be improved. This study seeks to clarify the role of threat appraisal, coping appraisal, experience and social factors in determining the level of individual preparedness in flood and cyclone vulnerable communities. 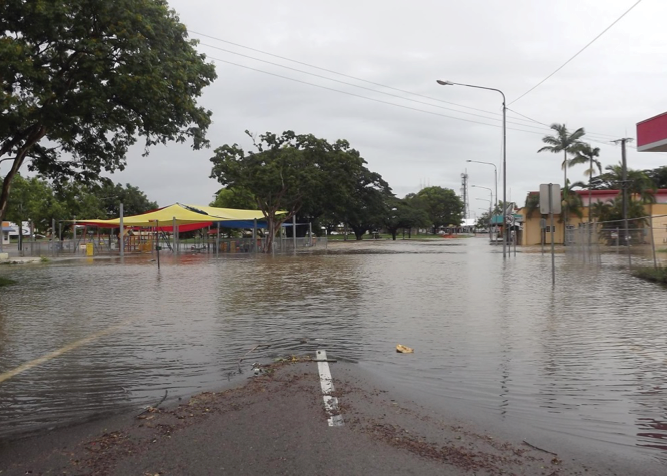 The main street of Ingham during the 2009 floods. Image: Lesley Kanakis.

The rural north Queensland community of the Hinchinbrook Shire has a population of approximately 11 700 people (Australian Bureau of Statistics 2015) and was chosen as the target population due to the high frequency exposure to cyclones and floods (Australian Bureau of Meteorology 2011b, Australian Bureau of Meteorology 2011a). Residents were recruited through convenience sampling and at community events and forums to participate in the project. This included markets, meetings, and disaster-preparedness events. The project was advertised in the local paper and the local council website added a link to the online version of the survey. A total of 275 (103 males, 169 females, three not identified) participants completed the questionnaire. The average age of participants was 55.55 years (SD = 17.51, range = 18-89). Participants had been residents of the Shire for an average of 35.55 years (SD = 23.12, range = .25-81). Of the participants, 77 per cent had previously experienced damage to their property as a result of a severe weather event.

The questionnaire was available in hard copy and online formats. The questionnaire included demographic items such as age, gender, dependent children, and marital status, in addition to study-specific questions. For example, the type and quantity of preparatory behaviours that individuals performed before a flood or cyclone was measured using a list of preparatory behaviours (adapted from Sattler, Kaiser & Hillner 2000 and the Queensland Government Disaster Management Preparation Checklist (Queensland Government 2011)). Three frequency scores were calculated from a list of where participants sourced information for an upcoming weather event. These information sources included from others within the community (family and neighbours), from media (television, radio and internet), and from community services personnel (police, SES, area warden and local council). Respondents provided a ‘yes’ or ‘no’ if they had experienced property damage as a result of a previous weather event. As the entire community is affected by flooding and cyclones (Australian Bureau of Meteorology 2011a), this was used as a measure of experience.

Table 1: Description of scales used in this research.

Pearson correlations were conducted to investigate the relationship between each of the variables that were investigated (Table 4). ‘Experience of damage’, ‘susceptibility’, ‘information’ (people, media, community services), ‘social connectedness’, and ‘self-efficacy’ presented significant, but weak, correlations with ‘preparatory behaviour’.

* Significant at .05 level, ** Significant at .01 level.
Note: Due to missing data, the number of participants in each cell varies from 259 to 275. The significance levels shown take these differences into account.

A hierarchical multiple regression was performed for ‘preparatory behaviour’ as the dependent variable with ‘experience of damage’, ‘susceptibility’, ‘information’ (media, community services), ‘social connectedness’, and ‘self-efficacy’ entered as independent variables in blocks. Table 5 displays the R2, R2 change, unstandardised regression coefficients (B), and the standardised regression coefficients (β). The final model of predictors explained 19 per cent of the variance in ‘preparatory behaviour’ with ‘susceptibility’, ‘social connectedness’ and ‘self-efficacy’ being the only significant predictors.

To examine whether ‘experience of damage’ influenced the determinants of ‘preparatory behaviour’, another hierarchical multiple regression was performed. ‘Preparatory behaviour’ was entered as the dependent variable with ‘susceptibility’, ‘information’ (media, community services), ‘social connectedness’, and ‘self-efficacy’ entered as independent variables in blocks, with the data split by the ‘experience of damage’. Due to insufficient numbers within the ‘no’ group (n = 61), only the ‘yes’ group (n=213) regression is discussed. Table 6 displays the R2, R2 change, unstandardised regression coefficients (B), and the standardised regression coefficients (β). For those who had experienced damage, 19 per cent of the variance in ‘preparatory behaviour’ was explained by the final model of predictors with ‘information from the media’ being the only non-significant predictor.

Table 6: Regression of susceptibility, information, social connectedness and self-efficacy on preparatory behaviour of participants with experience of damage.

Of the preparatory behaviours, having an evacuation plan and sandbagging internal drains were not endorsed by the majority of participants suggesting they did not perceive them as necessary to perform before a cyclone or flood. The low frequency of engaging in evacuation planning may be due to perceived difficulties in escaping the path of the cyclone or area of flooding, taking into consideration the relative distance of the Hinchinbrook Shire to major urban centres outside of Far North Queensland. Therefore, residents may require more information supporting the need for or importance of these behaviours to reduce adverse outcomes.

The results of this study suggest that increasing the perception of susceptibility, social connectedness and self-efficacy is one avenue that facilitates an individual’s preparation for a severe weather event. Additionally, increasing access to emergency preparedness information from emergency and community services organisations may increase preparation. These suggestions can be easily implemented targeting the factors that facilitate individual preparatory behaviours for future weather events thus increasing the likelihood of positive outcomes. These findings are limited by the sample size and effect sizes. Future research is required that explores the predictive validity of these factors.

Australian Bureau of Meteorology 2011a, Flood warning system for the Herbert River. At: www.bom.gov.au/qld/flood/brochures/herbert/herbert.shtml [31 April 2013].

Bandura A 1998, Health promotion from the perspective of social cognitive theory. Psychology and Health, 13, pp. 623-649.

Grothmann T & Reusswig F 2006, People at risk of flooding: Why some residents take precautionary action while others do not. Natural Hazards, 38, pp. 101-120.

Queensland Government 2011, Be Prepared for Disasters. At: www.qld.gov.au/emergency/dealing-disasters/disaster-prepare.html [20 March 2013].

Katerina Kanakis is completing a PhD in the area of community resilience at James Cook University, Townsville campus.