Coober Pedy is the opal capital of the world. In 1915, a 15-year-old boy named Willie Hutchinson first discovered opal in the area. The town has grown progressively since that time and, after World War I, many returning soldiers found comfort living in the underground housing that is commonly found in Coober Pedy. The town is located 850kms north of Adelaide and 680kms south of Alice Springs and has a long history of extracting opal, suppling an estimated 70 per cent of the world’s opal. Coober Pedy is also the service town for the mining ventures at Prominent Hill, Cairn Hill, and Peculiar Knob.

Along with a history of mine rescue, the unit assists the local Country Fire Service Brigade during fires and responds regularly to road crash incidents on the Stuart Highway. The unit also helps stranded tourists and local residents, often travelling as far north as Marla and as far south as Glendambo, and as far north east as Oodnadatta and as far east as William Creek, all almost three hours away. The Stuart Highway has a dedicated runway marked out and the squad maintains equipment to allow its use. The squad works in conjunction with the South Australian Police and remains a vital component of search and recovery operations. 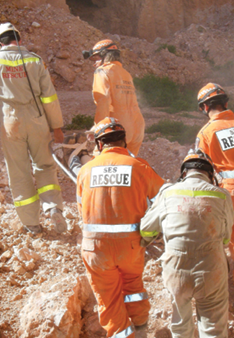 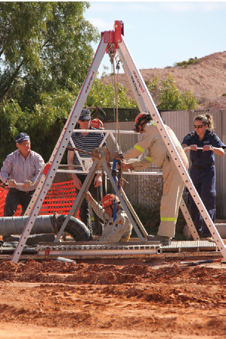 The volunteers with the Coober Pedy Mine Rescue Squad and State Emergency Service are a vital component of search and recovery operations for the mining town.

This year the volunteers were involved in the search for possible remains of a missing teenager after a man was charged in November 2013 with the girl’s murder almost two decades ago. Long days were spent working in 35 to 44 degree temperatures alongside major crime investigators and detectives. At times the team cleared mine shafts by hand and with buckets and, at other times, used heavy machinery to remove large volumes of dirt. Over eight mine shafts were searched without locating any remains. 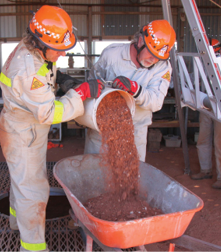 Large volumes of dirt are brought to the surface to be sifted in the search for remains.

The Coober Pedy Mine Rescue Squad and State Emergency Service volunteers are a vital response team for residents and visitors to this remote area of central Australia. Members of the Service come from all walks of life. There are presently experienced opal miners, health care professionals, council workers, mechanics, child care workers, teachers, truck drivers and lines men. These people are an excellent example of what a community can produce when like-minded people work together. 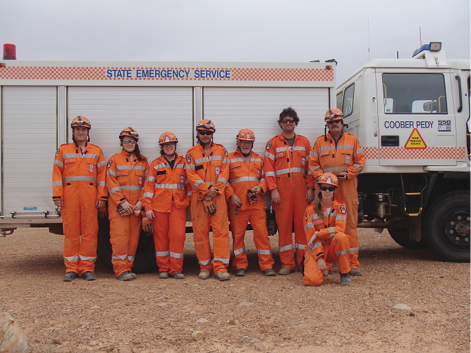 The Coober Pedy Mine Rescue Squad and State Emergency Service.