In 2012 the South Australian Volunteer Services Branch (VSB) ran a pilot program to attract recruits from culturally and linguistically diverse backgrounds for the state’s State Emergency Service (SASES) and the Country Fire Service (CFS). The program was launched in the Riverland area, east of Adelaide, and involved working closely with Multicultural SA to create networks with their local communities. An introduction to emergency services session was then held in Renmark with the assistance of local SASES and CFS volunteers.

Manyok Ajak and Gabriel Atem come from South Sudan and have shared their experiences of walking 90 days with little food or water to a United Nations refugee camp in Kenya. Both men were volunteer firefighters in their African homeland and spent 10 years in the camp where they married and started families before immigrating to Australia to start new lives in Adelaide’s northern suburbs.

All four new recruits explained their motivation for joining the SASES as an opportunity to serve their community and give something back to the country that took them in. They also hope to prove positive role models for Adelaide’s 5 000 South Sudanese community as well as their own children. 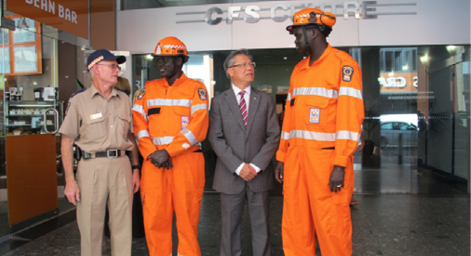