Claire Zara provides an update on what may be Australia's first family violence after disaster training.

A workshop with flood recovery workers in Victoria’s regional north east was commissioned by the Department of Human Services and developed in response to new findings on family violence following the 2009 Victorian bushfires. The training reflects international and national evidence indicating that men and women experience disasters differently, and have different risk factors for survival and recovery.

The recent research report ‘The way he tells it: relationships after Black Saturday’ (Parkinson 2012) showed that family violence increased for some women, while for others, it was a new and shocking experience in the wake of the bushfires. 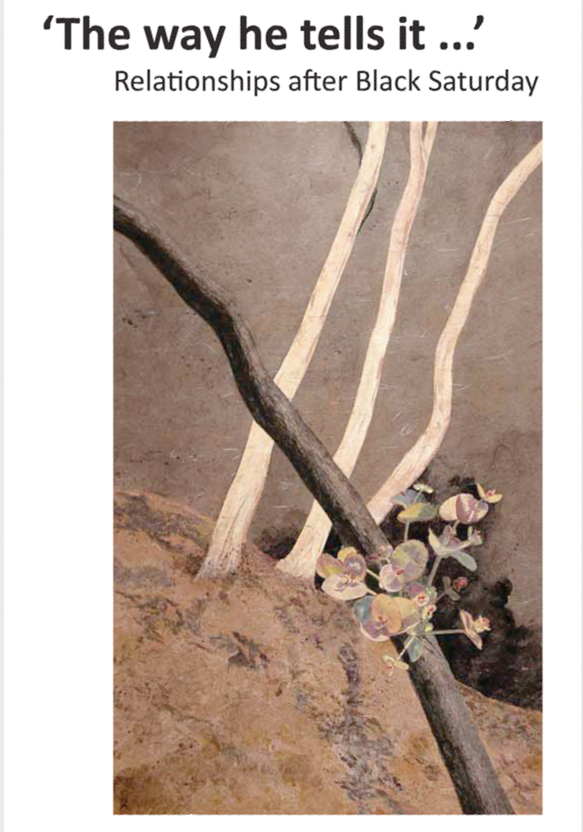 This report is organised into four volumes.

Volumes 3 and 4 – expansion of points made in the executive summary and further evidence.

Barriers to getting help

Family violence is often difficult for women to disclose at any time. This is more so in rural areas where it can become ‘common knowledge’ and everyone’s business. After a disaster it can be even more difficult for a woman to disclose because the man who is now harming himself and his family may have been a hero during the disaster or may be acting uncharacteristically – ‘not like himself’ .

The research found that women’s reluctance to seek help was exacerbated by service providers, including family violence workers, police and trauma psychologists. These workers appeared more sympathetic to men and excused their behaviour, labelling it ‘stress’ or ‘trauma’. Women who sought help for their partner’s violent behaviour were often shunted from one agency or case worker to the next. After describing how she had given up with the system, one woman told researchers: ‘I’ll get out of here in a box’.

Show me the data

Reluctance by professionals to name dangerous and damaging behaviour as family violence has severe consequences. For some women, not getting the help they or their partner needed, compounded the violence and forced them to remain unsafe. For the family violence service sector and the community, it meant having no realistic data on incidents of family violence following a disaster. Workers reported that they were ‘respecting the wishes’ of the client by interpreting incidents and situations in a way the client preferred. This effectively meant not naming or recording family violence. Some women who went to the police were not helped and their complaints also not recorded. The Victoria Police have recognised this situation and responded positively by introducing family violence training for all new recruits.

Parkinson, et al., (2011) write that “Teasing out the number of responses and even making ‘guesstimates’ about family violence and bushfire trauma was complex due to staff data-recording practices and inadequate data ... a common practice was to code ‘relationships issues’ rather than family violence.”

This important issue is addressed in the training, which skills workers to appropriately respond when the issue of family violence arises, and to be sensitive to their own observations. It enables them to ask the essential, and often unasked, question: Are you safe at home? and to be able to follow up through referrals and an appropriate recording process.

Trainers from Women’s Health Goulburn North East stressed that this new information does not increase the workload of emergency services workers nor does it assume they will take on the role of family violence workers. It equips workers with the knowledge of when and where to refer clients, friends or community members who need help. Correctly assessing the situation by asking the important questions can ensure that help is delivered early, preventing escalation of the behaviour and the need for further service intervention at a later time.

How family violence after disaster is different

While Common Risk Assessment Framework (CRAF) training in identifying family violence is familiar to the family violence sector, this new training addresses a specific set of factors that are present post disaster. The audience, too, differs from the usual participants who have direct experience of clients presenting with family violence issues. These workers, ideally case managers, council employees, Red Cross or other agency volunteers and recovery workers, who may not have previously viewed family violence response as part of their role.

There are different circumstances following disasters and this specialist training adds new knowledge and awareness to the CRAF training. Post disaster, women may not be able to articulate a need for help or that they are experiencing violence or abuse from a partner. Support workers from all sectors must be alert to the possibility of empathetic responses to men that may override evidence of family violence.

Environmental and social factors are drastically altered following a disaster. These present specific triggers that can lead to family violence as a first incident or as an escalation of previous violence. Triggers can include unemployment, temporary housing arrangements, trauma, rebuilding, media attention, grant entitlements, increased drug and alcohol use, and increased risky or ‘hyper masculine’ behaviours. Recognising that these triggers, while understandable, do not excuse violence or abusive behaviour, and that women and children have a right to safety at all times.

Increasing the knowledge and confidence of workers to identify and respond to families experiencing violence in the aftermath of a disaster is a paramount consideration in the recovery of individuals, families and communities. The awareness that ‘safety’ is more than surviving the immediate disaster will assist disaster recovery and help minimise further trauma on families.

Enarson, E., 2011. Does Violence Against Women Increase After Disasters? A fact sheet. At: www.gdnonline.org/resources/violence-against-women-in-disasters.

Resource snapshots and checklists. At: www.whealth.com.au/publications_information_sheets.html.