Reducing the impacts of cyclones through technology: a case study of Cyclone Debbie and the Sunshine Coast Disaster Hub

Ex-Tropical Cyclone Debbie wreaked havoc on the Sunshine Coast in March 2017. On Wednesday 29 March, the heavy rains began and by the next morning, Sunshine Coast roads were going underwater. With that rainfall came strong destructive winds of up to 108km per hour. On Thursday 30 March, all schools in the region were closed, along with beaches, shopping centres, the suspension of train services and 40 road closures. The SES and Sunshine Coast Local Disaster Management group responded to 547 calls for help in the region. 32,000 homes and businesses across the Sunshine Coast lost power during the event. By Friday 31st March, conditions were easing and the long road to recovery began.

Episodic rain events that occurred in Queensland during 2010 and 2011 resulted in the displacement of over 200,000 people and the inundation of 22 towns. The floods affected more than 78 per cent of Queensland, an area greater than the size of Germany and France combined. The floods caused the loss of 33 lives and damages exceeding $5 billion. The scale of the disaster led to the establishment of the Queensland Floods Commission of Inquiry into the Queensland floods of 2010-2011 on 17 January 2011.

These recommendations provided the framework for the development and implementation of the Sunshine Coast Disaster Hub platform, a one-stop-shop for the community and disaster managers before, during, and after disaster events.

Designed as a contemporary and user-friendly technology space, the Disaster Hub provides comprehensive, centralised and real-time information for the public, media and external agencies before, during, and after a disaster event. It enables preparedness for events and has become a critical intelligence gathering and decision-making tool for the Sunshine Coast Council and the Sunshine Coast Local Disaster Management Group during events. The platform receives data from numerous real-time information feeds to provide up-to-the-minute information about emergency situations. The Hub works on any internet-connected device, providing information to the community any time of day. 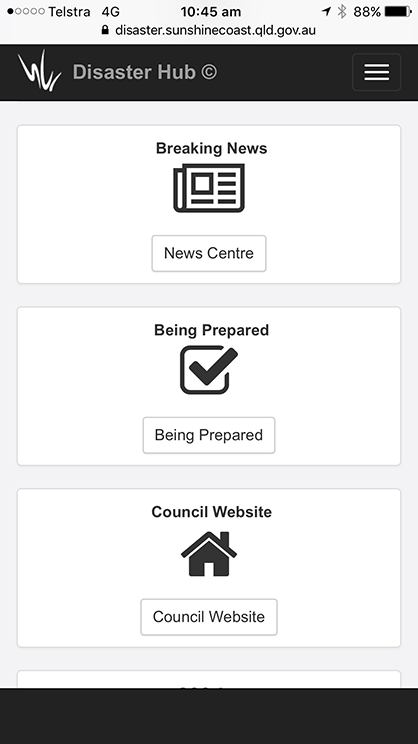 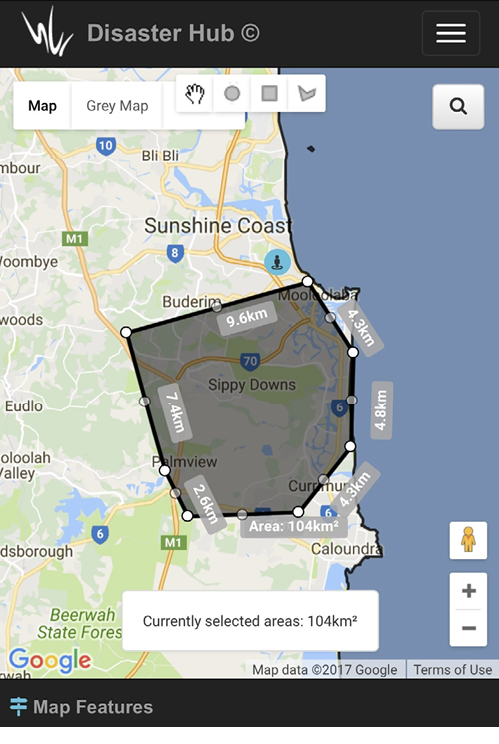 The platform centralises information to the one easy-to-access site, helping the community to make decisions about the risks they may need to consider when disasters arise. During Cyclone Debbie the Hub received over 143,000 page views on 30 March accessing information, advice, warnings and media releases that contained important information about anticipated high winds, heavy rainfall and possible flooding.

An increasingly popular section of the Disaster Hub is the social media section, which scans and displays the latest local social media feeds, including the Council’s own Facebook page and posts. These reached over 520,000 people during the event, with 10,009 comments, likes and shares and with 15,257 disaster information video views. Event by event, the Hub is experiencing an increasing uptake of social media as the preferred method of information sharing during events.

The road closures section showed 52 local and state road closures at the height of the event, including detailed information about the closures or expected delays. Live traffic camera feeds provided real-time imagery of traffic flows across the region and beach cameras provided feeds of beach and surf conditions along the coastline.

The flood mapping section provided guidance on the locations that may be affected by estuarine flooding or storm surge. The maps were especially useful in providing an easy self-assessment process for checking flood risk, particularly for property owners wanting to know if their property was likely to be affected by floodwater. This significantly reduced unnecessary sandbagging operations for the SES by indicating the locations that could, or were unlikely to, be affected by floodwater. Live rainfall totals also provided further guidance about locations affected by heavy rainfall and localised flash flooding.

The revolving spotlight section on the Disaster Hub homepage provided information about dam overflows, emergency contacts, power outages, fallen power line safety and important information on what to do before, during and after the event. At the peak of the disaster activation over 32,000 properties lost power supply for up to three days. This equated to a quarter of the Sunshine Coast population without power, which in turn affected telecommunications and traffic control systems.

The news centre section provided vital information that was conveyed to the community, emergency services, local radio, television, social media and print media outlets. Council’s media releases provided a single and reliable point of truth for the community throughout the event to minimise public risk by providing the latest information. This included dangerous road traffic conditions, limiting unnecessary travel, school closures, power outages and advice on how to stay safe and where to seek emergency assistance.

The Disaster Hub has become an integral technology for disaster operations and activations for the safety of the Sunshine Coast population. It has been recognised and awarded at state and national levels for its technical innovation and its contribution to building resilience across sectors and the community. It provides highly effective technology, particularly for local government, in protecting communities when emergencies arise.