Research into how Australian children are involved in bushfire preparations around the home is being applied to disaster preparedness in slum communities of Bangladesh.

Dr Briony Towers, through her PhD research with the Bushfire CRC completed in 2011, found that including children in the development of an emergency management plan greatly increased its effectiveness.

‘If children are given the opportunity to access knowledge and information and to be involved in emergency management planning, they actually have really great ideas that can improve the plan for the household and their community,’ Dr Towers said.

Focusing on child-centred disaster risk reduction in Australia for her PhD, Dr Towers has continued her child-focused work as a research fellow for RMIT University. She is also involved with the Bushfire and Natural Hazards CRC.

Dr Towers is assisting World Vision Australia to deploy a fire detector device, produced by the South African social enterprise Lumkani, in Bangladeshi slums. The Lumkani device is a sensor that, on detecting rapidly rising temperatures, sends alerts to all other nearby Lumkani devices and to the mobile phones of owners.

World Vision Australia was recently involved in the Google Impact Challenge, which allows the public to vote for a charity project to receive $750,000 in funding. While not taking out the overall prize, World Vision Australia was granted $250,000 by Google and plans to deploy the Lumkani device in settlements in Bangladesh. Estimates show that the losses from fires in these settlements could be halved with the device.

Dr Towers’ previous work with the Bushfire CRC has taught her important lessons about the role of children in disaster preparedness and she is applying this to her work on this project. The Lumkani is small but will make a big difference in communities in Dhaka. Image: World Vision Australia My PhD gave me a lot of insight into the importance of understanding children’s knowledge and experiences from their perspectives. I met kids who had been given genuine roles in their family’s plan and they were able to give me detailed descriptions of how to defend a property and what the different dangers are that you need to be thinking about.

‘These kids were telling me all this information that is consistent with the advice of the fire agencies. That was because they had been given a genuine role in their family’s emergency response plan,’ she said.

According to Dr Towers, children who are included in the planning phase can become competent in making decisions at a young age, preparing them for future roles as community decision-makers.

‘They can actually be making really good decisions about disaster risk reduction now as children and young people,’ she said. Research is backing up the deployment of Lumkani in Dhaka. Image: World Vision Australia

In her work in Bangladesh, Dr Towers will apply the lessons learned from her research to support the deployment of the Lumkani device.

‘Making sure children and young people have a seat at the table when a decision is being made about implementing the warning system and making sure they have the information they need to genuinely participate is really important. There might be some training workshops specifically for children where they have the opportunity to ask questions and see how the detector works,’ Dr Towers said. 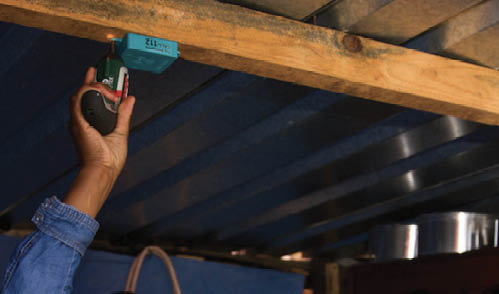 The Lumkani device has already been rolled out successfully in parts of Africa and is easy to install. Image: World Vision Australia