Warm and dry lead up to fire season

Most of Australia experienced autumn and winter conditions drier and warmer than average this year. In southern Australia in particular, the four months from May to August 2017 saw record dry conditions.

When the Bushfire and Natural Hazards CRC gathered scientists from the Bureau of Meteorology and fire and land management agencies around the country for a workshop in mid-August the early indications were for warm and dry conditions to continue.

The Bushfire and Natural Hazards CRC has brought these collective resources together for 10 years to produce the Outlook. The Outlook provides information to assist fire authorities in making strategic resource and planning decisions leading up to the fire season.

CEO of the Bushfire and Natural Hazards CRC, Dr Richard Thornton, said the annual southern and northern Outlooks were invaluable guides for community information in the lead-up to bushfire seasons.

‘Although much of southern Australia has the potential for above-normal fire conditions, it must be remembered that even normal fire conditions will produce fires. Australia is a land of fire and everyone needs to be prepared; from the farmer on the land, to people in the urban fringes of our towns and cities.

‘Our research is consistently showing that many Australians, especially those in high-risk areas, are not sufficiently ready for fire and have not put fire plans in place well ahead of time. They understand that when the conditions are right, hot and windy days with dry vegetation, fires will occur. But they just don’t think it will happen to them,’ said Dr Thornton.

In determining the fire season potential across Australia, several factors are taken into account. The amount, location and timing of rainfall in the period leading up to the fire season are critically important for estimating  fuel loads and dryness. The temperature and rainfall outlooks for the next few months are crucial factors for influencing the development of fire threat.

Of particular importance are the future tendencies of sea surface temperatures in the Pacific Ocean, associated with the El Niño Southern Oscillation, and those in the Indian Ocean. These are major drivers of climate over much of Australia.

Other factors considered include the distribution of firefighting resources to meet potential threats, as well as previous fire activity and the amount of prescribed burning that can reduce the threat.

The Outlook workshop participants discussed the weather, landscape conditions and cross-border implications leading into the fire seasons. In addition, areas where that had the potential for a fire season that was above normal, normal or below normal were determined. 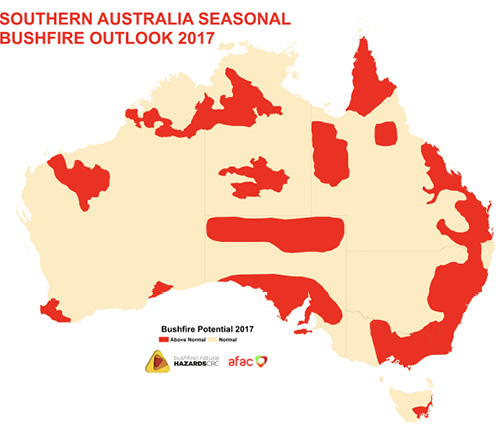