Notes from the field

After a string of annual events around Australia since 2007, EMPA’s inaugural New Zealand conference was held at the Heritage Hotel, Auckland on 22-23 May. Sponsored by Auckland and Christchurch City Councils, EMPA NZ 2014 attracted more than 150 delegates representing local councils, national government and a range of industry organisations with an interest in communicating before, during and after disaster events.

Highlights included presentations by Bob Jensen, Principal Assistant Deputy Secretary at Department of Homeland Security, USA, and Denis McClean, Head of Communications and Outreach at UNISDR, Geneva. Both discussed the growing importance of the communicator in disasters, with McClean presenting moving post-typhoon video of the Philippines.

A ‘Fast Fives’ session saw 10 NZ communication practitioners on stage for five fast minutes where they had to present a particular aspect of their job function. This not only gave great insight into the breath of activities undertaken but also exposed the skills and talents required by communicators generally.

EMPA’s Australian conference was supported by EMA and was held in Canberra from 1-3 June. The event continued the strong tradition set by earlier conferences in covering a variety of communications, warnings and public information issues.

Denis McClean (UNISDR) crossed the Tasman to address the 90 delegates in Canberra, and Craig Fugate, Administrator of FEMA, USA provided a video message in support of Australian and New Zealand communicators who respond when an emergency situation arises.

The conference workshop was conducted by Peter Rekers and Rebecca Riggs of Crisis Ready, and immersed delegates in several complex disaster exercises on the imaginary island of Kriso.

The ABC’s Ian Mannix asked the question ‘How do we overcome peoples’ resistance to warnings’, and Kate Brady from Australian Red Cross explored ‘The Language of Emergencies’- a provocative self-examination of the words we use and how these form our attitudes to response.

Research in selected topic areas is funded from profits from both conferences. EMPA Research Committees in both Australia and New Zealand have been established. Nominations of research topics are open and the next raft of research grants will be announced in the coming months. 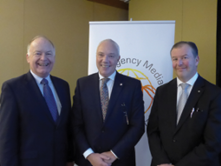 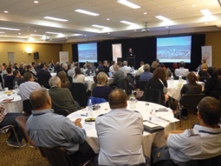 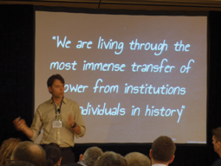 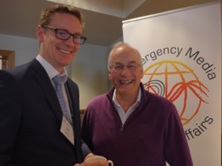 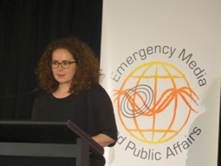 Kate Brady spoke about use of language. 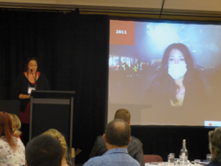 Corinne Ambler spoke about being a journalist reporting on the earthquake and, since then, as a communicator for Red Cross. 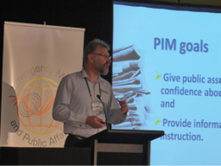